The Dazcat 1295 strikes the perfect balance between speed, comfort, safety and quality of build. All this wrapped up in a beautiful head-turning package, making it the perfect cruiser-racer catamaran choice whether inshore or offshore sailing.

The elegant hull design is where this boat’s power sits; with its superb balance of weight, length and beam ratios it gives an immensley fast yet safe and comfortable ride in all conditions.

As with all our Dazcats, the deck layout with the self-tacking jib option and all the lines running back to the cockpit makes her easy and safe to manage even when shorthanded. The D1295 really is a great choice whether racing or enjoying some cruising time with family and friends.

The 1295 is an excellent decision. It meets all the family’s sailing needs. 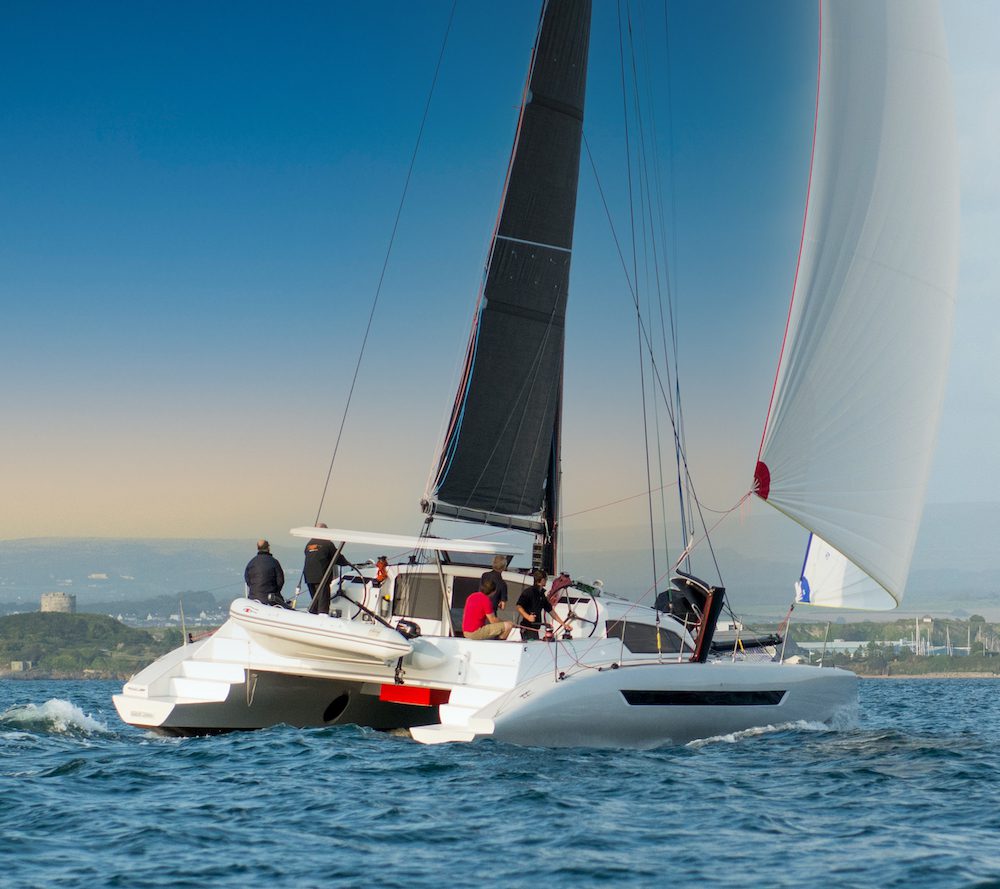 PLEASE SEE THE BROCHURE BELOW WITH FULL AND DETAILED INVENTORY FOR A NEW 1295.

At 42.5 feet (12.79m) and a length to waterline beam ratio of 13-1 but still weighing-in at 5 tonnes, the Dazcat 1295 is a truly comfortable and elegant family cruiser that has been optimised for performance sailing. She has proven that she can not only provide safe, comfortable and enjoyable family time but also win on the RORC and MOCRA inshore and offshore race circuits.

Internally there are three double cabins with a central galley in the starboard hull, overlooking the saloon and across to the nav. station. The saloon seating and table convert to a day bed or fourth double.

The electric flush head and shower are placed forward in the port hull, which is also where the black tank is fitted. There is full 1.95m headroom in the forward heads and showers.

Internal finishing is carefully hand-faired by skilled craftsmen and is complemented with trims and linings of your choice. Bimini and solar panels are optional.

The Dazcat 1295 is a very exciting boat and competitively priced for the high standard of construction, personalisation, equipment and specifications. The design of this boat has been developed using direct experience on both inshore and offshore MOCRA and RORC racing.

At Dazcat Design, we believe that applying the experience and research gained from racing also makes for a better cruising boat. Typically of our Dazcats, the shallow draft allows you to venture where others can’t, opening up your cruising possibilities and ability to escape to quieter spots. All Dazcat boats, while built to take the severe punishment of racing, are combined with the signature design-philosophy of both comfort and great looks. This along with her comfortable, spacious accommodation and ease of handling make her the ultimate racer-cruiser.

The D1295 is offered either as a production boat of tailored to the client’s requirements. When customising a boat purchased to order, the team work closely with the owner as an integral part of the design and build process.

Thanks to the quality of build and timeless good looks, Dazcats maintain exceptional resale value whether custom or production. 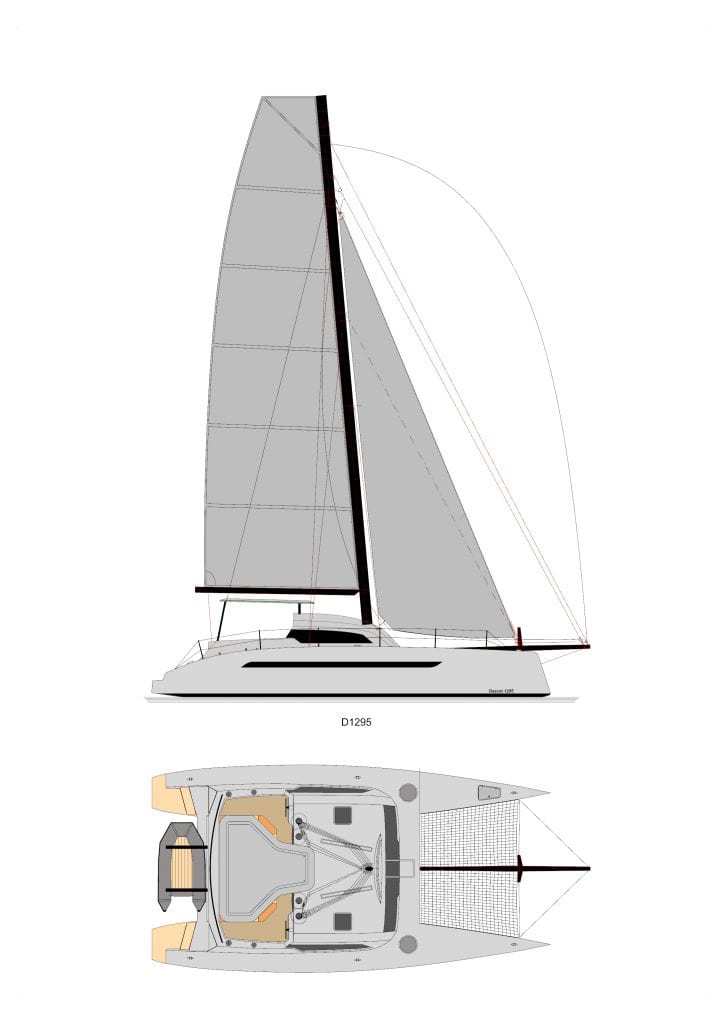 Download the full D1295 Brochure here or read online below

For a 360 look around click on the image below 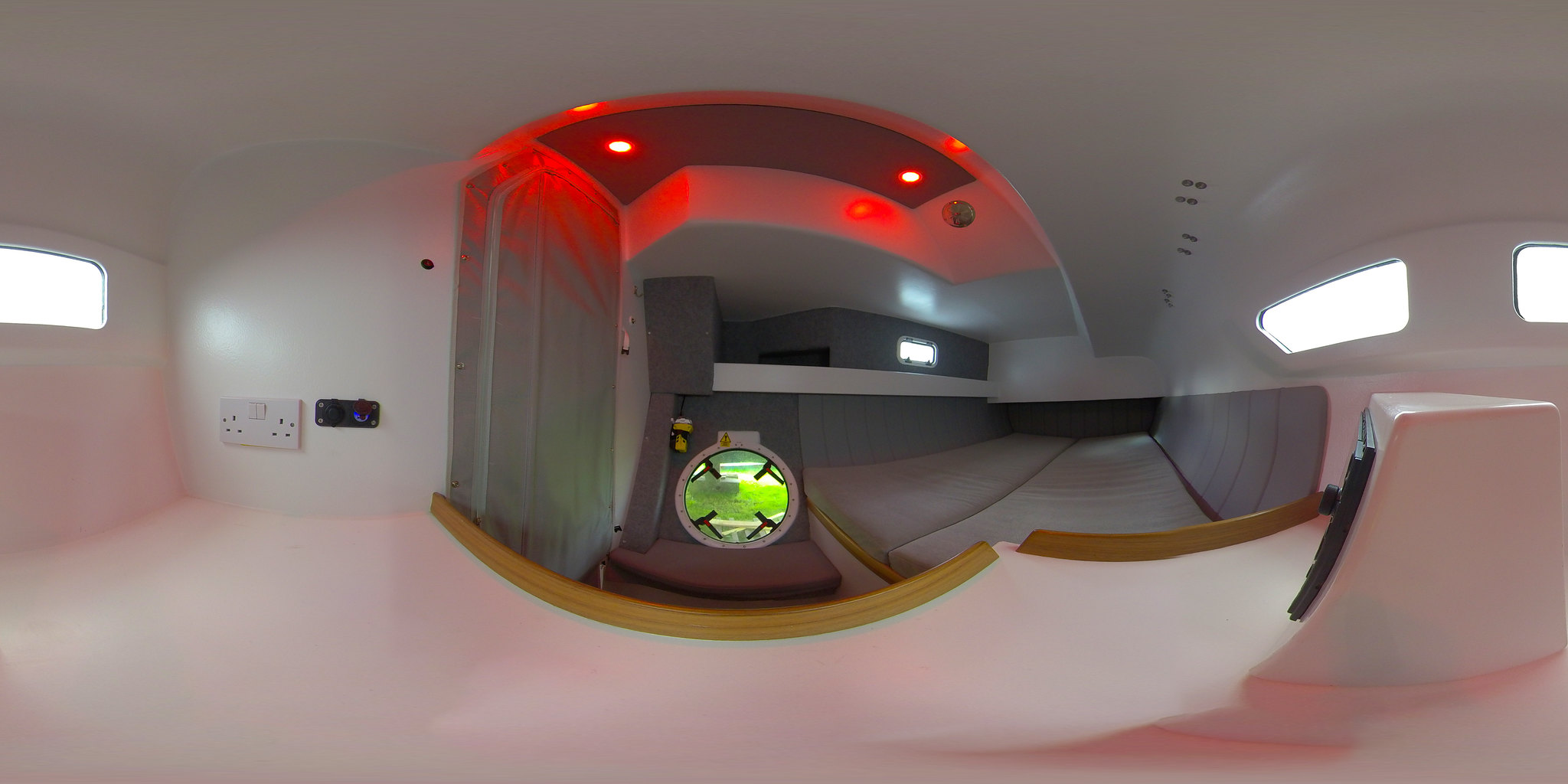 Read about the build and background.

Why did this owner choose a Dazcat 1295 Catamaran?

During the build of Dazcat 1295 Slinky Malinki we asked the owners why they had chosen a Dazcat. This is what they said:

“We go back a long way with West Country boat builders. Mel has known half of the Baker brothers for almost 20 years. Matt first invited us to sail on Paradox in Plymouth Sound almost as long ago. We were hooked as she lifted a hull and we accelerated away at 12 knots in 12 knots of true wind. Why would anyone want to potter about at 6 knots? It was an adventure in itself, little did we know where it would lead us. We only hope that Matt is on a sales commission, although there may be some frustration at how long it took to get us over the line.

After monohull sailing our first multihull was an F24 trimaran, light fun and occasionally out of control – the driver and not the boat. Great fun and a happy Cowes week as Mel breastfed our three month old baby in the beer tent. A sign of things to come, young children led to a break from multihull sailing and a few happy years cruising on Mel’s family monohull.

By the time the children had grown a little we had moved overseas and hoped that a trimaran would be ideal for European lake sailing. Al Wood found us a Dragonfly 28 Sport and we had three years of family cruising in light winds and glorious sunshine in Europe. We moved the boat back to the UK three years ago and enjoyed some time holiday sailing back in the Solent. More wind, the smell of sea weed and the occasional race.

The Dragonfly is an outstanding boat. Safe, fast, responsive, forgiving and easy to sail. One happy summer afternoon in a stiff Solent breeze we passed a 40 ft monohull with 6 guys on the rail. The Dragonfly was higher and faster; much to the surprise of the monohull crew we also two dogs asleep in a bed on the the windward net, ears flapping. At the same time she could be raced as hard as the bumbling skipper and a few mates could handle; the week before she had touched just shy of 19 knots down the back of the Island only to find our class cancelled. What a boat.

With all of its merits the Dragonfly was getting a little tight on weekend cruises; growing children, fatter dogs. We wanted to cruise as a family and dreamt of the chance to do more offshore racing as happy amateurs. What would give us the same speed and engagement whilst being a larger platform to go further.

Dazcat was the standout choice. Well placed in Nigel Iren’s famous triangulation of weight, volume and cost – a 13m boat, displacing 5-6 tonnes. Not cheap by monohull standards, but still coming in far below ‘exotic’ territory for a displacement-length ratio of below 70. The perfect racer cruiser. Several long phone calls, a quick sail and we knew that this was the right choice.

Dazcat has been about more than building a boat. It is clear to us that Darren and Simon have built a culture and a family. They are rightly very proud of their product, they should also be very proud of the way they work with their customers as they become part of the family.

Simon has been kind enough to invite us to join him in almost 500 miles of offshore racing this year on Hissy Fit. What other boat builder would make that kind of long-term commitment to building a relationship with the team and the brand? That kind of engagement can only come from a small yard that is clearly in love with the boats they build.

Getting some miles under the keel provided a chance to see how some of the best amateur multihull sailors in the country race these boats offshore and experience first hand how outstanding Dazcats are when pushed hard. Class leading performance and cold beer in the fridge. We look forward to following you around the track in 2018, we have plenty to learn.

We take delivery of the boat in time for a summer cruise of the Channel Islands and France. We continue to live overseas and have a plan to move the boat to the West Country for spring 2018 for the occasional race before summer cruising in Europe. If we find our feet we hope to be on the 2019 Fastnet start line.”

Since taking delivery of their Dazcat 1295 not only have the family enjoyed some great cruising time, they have also competed in a number of RORC and MOCRA races. They were indeed at the 2019 Fastnet start line and came in at an impressive 4th in class – not bad for their first Fastnet. They also won the RORC Myth of Malhem earlier in 2019

Dan and Kika from Sailing Uma finally find “a catamaran built for sailing!” 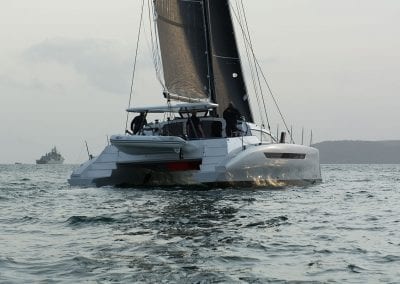 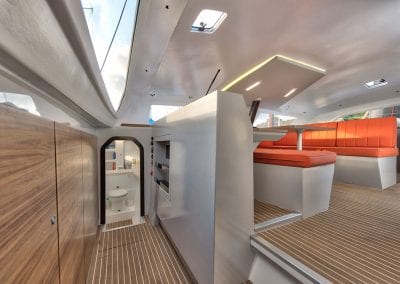 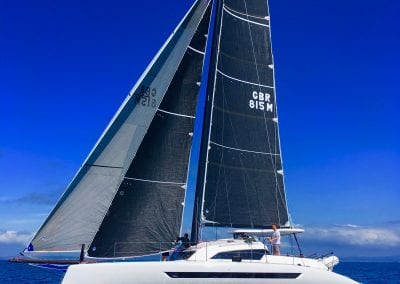 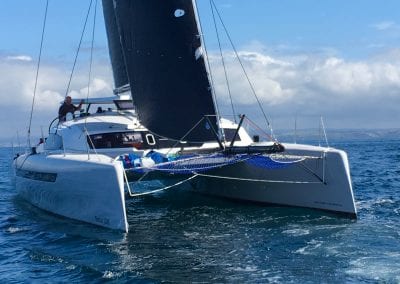 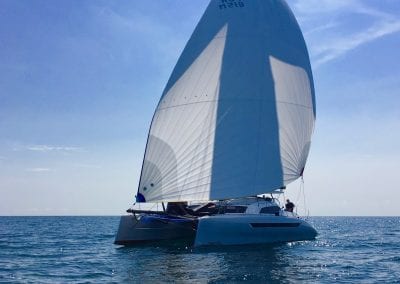 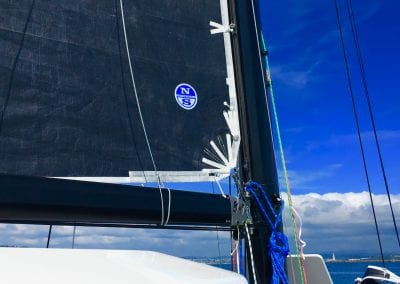 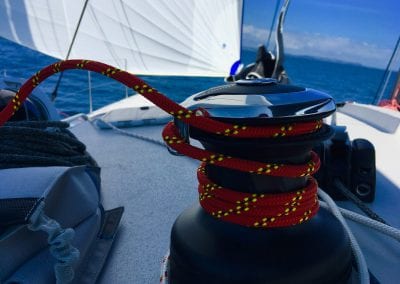 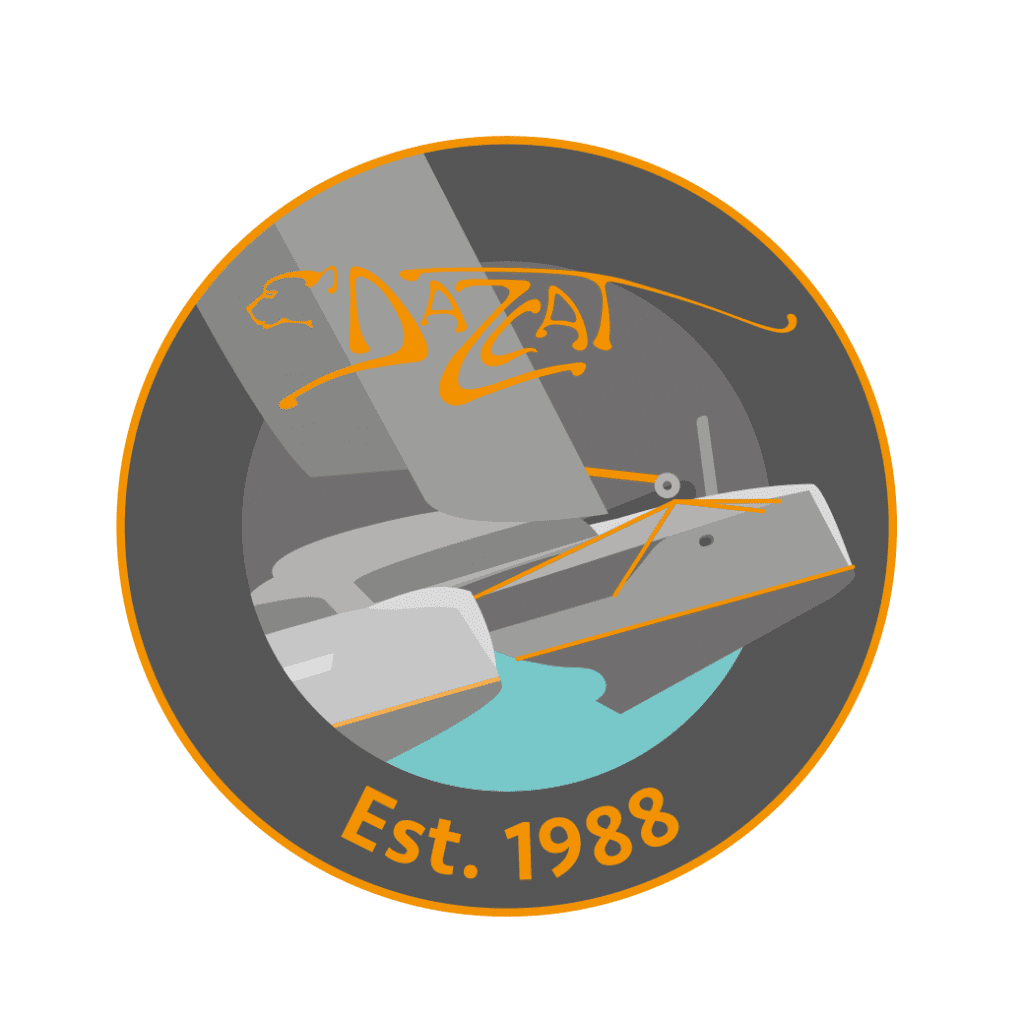